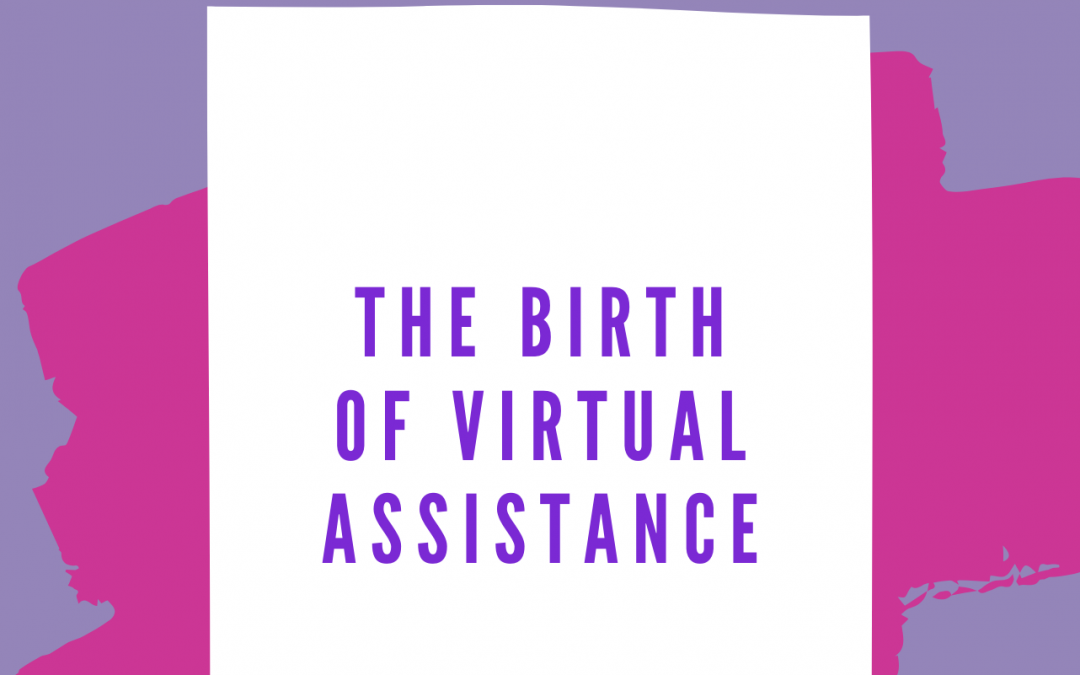 The History Behind The Virtual Assistance Industry

So, what is the Virtual Assistance Industry? Let me explain a bit about the history behind this term. Being a secretary was the very beginning of The Birth of Virtual Assistance. Since the 40’s the profession has evolved to include a wide variety of different services.  Today it is referred to as administrative, but this is not the only category of services that belong to this new & exciting profession.

The Virtual Assistance Industry has a rich but little-known history of individuals and organizations that saw an opportunity. The opportunity in the work-at-home arena to develop and grow businesses that could support and sustain families. Many women and men walked the walk and talked the talk that propelled the industry to become the small business resource it is today.

The Birth of Virtual Assistance began its early beginnings from secretarial services during the forties. In fact, it would be safe to call secretarial services as the mother of virtual assistance. However, throughout the course of its own history, the virtual assistance industry strived to create a distinction from its “mother” making it a separate profession yet belonging to the same type of industry.

Collectively they are called administrative professionals. From their separation, virtual assistance has grown. It’s advanced until it has become the global preference of business owners. This is the birth of a profession that became a worldwide phenomenon and permanently changed the world’s view on business outsourcing.

It all began with shorthand when Sir Isaac Pitman in the early 1800s invented the shorthand method and founded the first school for secretarial services. Only men were admitted to the school and they were the only ones who could perform the said tasks given the political climate during those days.

Well, during that time period, women were confined to only doing household chores. Not until a decade later when typewriters were invented were women finally joining the industry. And around 1930, the number of men in the secretarial services started to wind down. Can you imagine what women of the past would say about the Virtual Assistance Industry today?

In 1942, the National Secretaries Association was born. It was founded in order to foster professionalism among secretaries in the US. And less than a decade later the first exam called Certified Professional Secretaries was administered. The CPS Examination was a three-part exam, covering the areas of office technology, management, office systems & administration. More than 66,000 people have achieved this rating since 1951.

It was in 1952 that a special day called “Secretaries Day” was created which later in the year 2000 changed to “Administrative Professionals Day”. The move was made in order to recognize all individuals working in the field with different title names.

The Birth of Virtual Assistance

Anastacia “Stacy” Brice began working virtual as a full-time home-based contractor with an international client providing administrative support, travel planning, and personal assistance. Back then the most prevalent medium through which people did administrative assistance from a remote location is by using the telephone and fax machines. It was only in 1994 that the internet was utilized in assisting business owners from another location.

The term “virtual assistant” was born in 1996. It commenced from a simple conversation between Anastacia Brice and life coach Thomas Leonard when the latter coined the term while having a phone conversation with the former. With the idea already in Brice’s mind, she borrowed the term to name the new emerging profession. And in the next year, she witnessed how the profession was formalized.

It was in 1998 that Anastacia Brice opened the first organization for virtual assistants called the AssistU. The years have had many more developments in this industry. In 1999, The International Virtual Assistants Association was formed in order to respond to the growing number of people involved in the business. And just like any organization it helped represent the profession to the world.

The Growth Phase of Virtual Assistance

Virtual assistance has grown and has created a unique distinction that has marked its identity to the world. From being simply a sub-category of secretarial services, it equaled the profession.  Later it surpassed it in measures beyond its beginning. Today, the work of a virtual assistant is getting more in demand in the business world.

Your Growth, Your Future

Knowing your history helps you understand your foundation, where you come from and most importantly WHY you can build a long term, sustainable business. It’s because of those that came before you, 10, 15, 20, 25 years ago – people who walked the walk talked the talk. The people that spent many hours answering questions and overcoming obstacles, that have paved the way for you to be in the Virtual Assistance Industry you’re in today.

Please don’t forget where you came from.

Your History is Your Future!